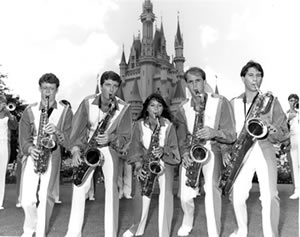 Vickie Bowden has combined her talents on saxophone, clarinet and flute to be recognized in several genres of music including Musical Theater, Latin/Tropical, and Jazz Fusion as well as Latin and traditional Big Band Music. She has performed with artists including Marc Anthony, Toni Tennille, Wayne Newton, Bob Mintzer, Scott Robinson, Steve Turre, Milly Quesada, Jose Feliciano, Mike Post and many others.

She has been a regular in New York's East Village Jazz club "Visiones" with The Ed Palermo Big Band and in Harlem with The Tom Pierson Orchestra. Vickie also toured extensively throughout Europe, North and South America with International productions of the Broadway Show "Ain't Misbehavin" and artists including Grammy-winner, Olga Tañon and Grammy-nominated, Manny Manuel.

While living in New York City, she recorded for artists both ‘known’ and ‘unknown’, along with various music videos and performed in several musicals including extended runs of "The Rocky Horror Picture Show" and Jackie Warner’s production of "Ain't Misbehavin".

Vickie is an alumnus of the Walt Disney World All-American College Band, as one of five reed players selected from a national audition tour. The group was featured at Walt Disney World in Orlando, Florida, and performed for an estimated one million visitors each summer.

Vickie Bowden studied at The University of Michigan with Donald Sinta on saxophone, Keith Bryan on flute and John Mohler on clarinet. She was also a proud member of the prestigious University of Michigan Marching Band and the U of M Jazz Ensemble. She then moved to New York City to graduate from The Manhattan School Of Music where she studied with the legendary Joe Allard on saxophone and clarinet, and studied Jazz with Bob Mintzer and Jack Gale.

In 2001, Vickie returned to her home town in Michigan with her husband, Eddy Garcia to raise their 2 children. She can be seen performing often in pit orchestras for Musical Theater productions and stage concerts in the region as well as teaching woodwinds privately. She is an active advocate for Music and Arts education in the public schools and served many years as president of The Bay Music Foundation, which provided generous scholarship opportunities for young musicians in the community.